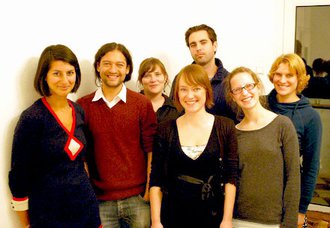 From 2009 trough 2014, the young researchers' group Networking Religion – Civic and Economic Potentials of Religious Communities was hosted by the Center for Religious Studies (CERES) of Ruhr Universität Bochum. It was led by Prof. Dr. Alexander-Kenneth Nagel. The group gave six young reseachers a framework for their own PhD projects in the field of religoin and migration. The group was sponsored by the Ministry of Innovation, Science, Research and Technology (Ministerium für Innovation, Wissenschaft, Forschung und Technologie - MIWFT) of the German federal state of North Rhine-Westphalia.

The group combined innovative research in the field of religion and migration with the structured and active support of young scientific professionals.

In group's collaborative efforts, productive contributions of religious communities to modern societies of immigration were focused. Underlying the research was the hypothesis that religion is considerably conducive to giving home to migrants. However, this contribution is not adequately being accounted for in political and academic debates. In the research group, this limited point of view was challenged by empirical case studies concerning the potentials of migrant religions in the realm of civil society. These potentials included material and financial support as well as youth work or work with the elderly, educational opportunities, assistance in administrative formalities and, last but not least, political organizations and interest groups.

In this framework, the young researchers especifically focused on the networks of religious migrant communities by explicitly refering to relations of trust and support inside these communities on the one hand and their external networking on the other hand, e.g. relationships with government facilities or other religious groups. In order to analyze social interconnections in and beyond religious migrant communities, traditional methods of empirical social research with network analytical approaches were combined.